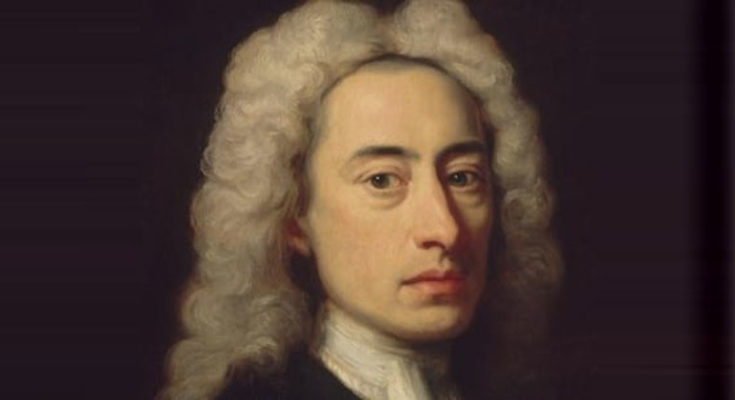 Even as April was “Literature Month,” the days of May 21-30 might as well be a week to remember Alexander Pope.

Pope was “regarded as one of the greatest poets, translator and sharp-penned satirist of public figures and their behavior.”

The Poetry Foundation described Pope’s mock epic “The Rape of the Lock” and “Essay on Criticism” among his other writings, thus:

To read his work is to be exposed to the order and wit of the 18th century poetry that preceded the Romantic poets.

Pope primarily used the heroic couplet and his lines are immensely quotable.

From an “Essay on Criticism” come famous phrases like “To err is human; to forgive, divine.” “A little learning is a dangerous thing;” and “Fools rush in where angels fear to tread.”

Other excerpts: ‘Tis with our judgment as our watches, none /Go just alike yet each believes his own.’

“Words are like leaves; and where they most abound, Much fruit of sense is rarely found.”

“Be not the first by whom the new are tried, Not yet the last to lay the old aside.”

Pope was born on May 21, 1688 in London, England to a Roman Catholic businessman Alexander Pope and his second wife Edith Turner. In the same year the Protestant William of Orange took the English throne.

Because Catholics were forbidden to hold public office, practice their religion, and attend public schools, Pope was mostly self-taught.

Pope contracted tuberculosis of the bone when he was young, which disfigured his spine and purportedly allowed him to grow up to only 4 feet and 6 inches.

Alexander Pope died on May 30, 1744 in Twickenham, United Kingdom.*