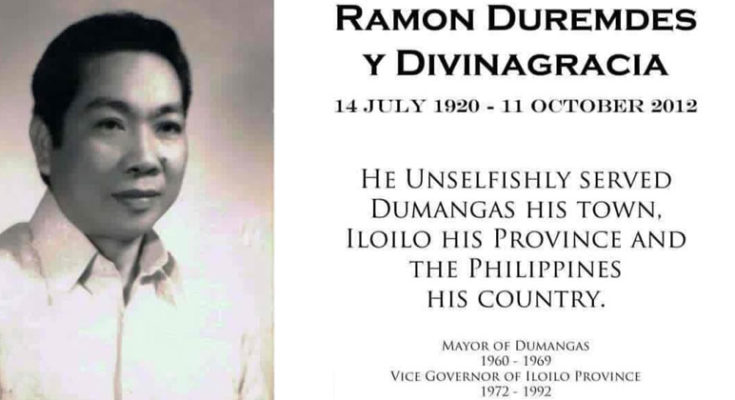 A “legacy of integrity” stands out as Ilongos remember the former Vice Governor of Iloilo.

This July 14, 2020 is the birth centenary of Ramon Duremdes who also served for 3 terms as Mayor of Dumangas, Iloilo.

Ramon Duremdes set a bar for public service when he was first elected as Dumangas Mayor in 1960. The local police who were then political appointees by the town mayor, by tradition had to tender their resignations.

“I sought to become mayor in order to serve our people and if your being in the police is to serve the public then there is no need to resign,” Duremdes told an amazed crowd at his first public gathering as mayor.

Dumangas under the administration of Mayor Ramon Duremdes was marked with numerous projects which helped uplift the economic and social status of his townmates.

Ramon Duremdes first entered government service in 1939 when he was appointed extension teacher in Ermita, Dumangas. In 1940 he became clerk in the Office of the Mayor in Dumangas.

During World War II in 1941 he was inducted into the United States Armed Forces in the Far East (USAFFE) as Sergeant and later joined the guerrilla movement after the USAFFE surrendered to Japanese forces.

While working as a clerk in the Provincial Board starting in 1947, Ramon Duremdes took up law studies in the evening at Central Philippine University. He obtained a Bachelor of Laws degree in 1953, took and passed the Bar that year.