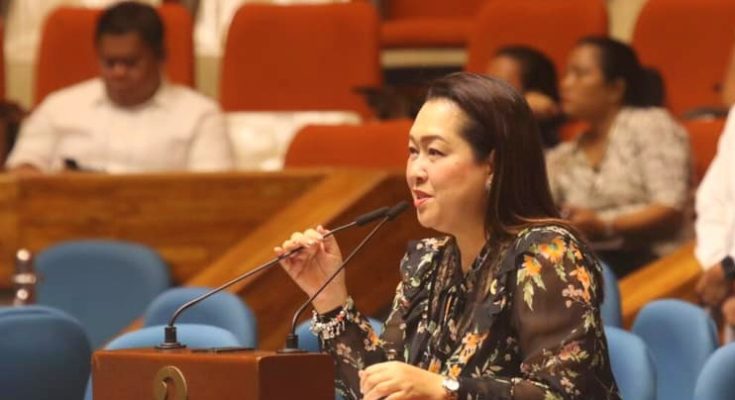 PHOTO: Guimaras Representative Lucille Nava calls for urgent reforms on sea travel at Iloilo strait during her privileged speech in the House of Representatives, on August 13, 2019.

Lone District of Guimaras Representative Dr. Lucille L. Nava MD, has called for support from the Department of Transportation (DoTr) to address the urgent needs of some 18,000 sea travellers that cross the Iloilo strait daily.

In a privileged speech at the House of Representatives in session August 13, 2019, Nava stressed some “priority interventions” like increasing the number of vessels plying the Iloilo – Guimaras route and vice versa.

“Presently the vessels deployed can accommodate only about 6,000 people daily,” she pointed out.

Congresswoman Nava batted for an “extension of the moratorium on the Certificate of Public Convenience for wooden-hulled motorbancas subject to newly adopted restriction for a reasonable period of time to finally comply with MARINA (Maritime Industry Authority) rules.”

She also asked to grant motorbancas “special permits” as water taxis for cargo, medical emergencies, or tourism to minimize adverse economic impact upon retirement of these wooden-hulled regular passenger conveyance.

The Guimaras solon noted “the need for expansion and improvement of Jordan RORO wharf with more berthing facilities and a passenger terminal, as well as the wharves of Jordan and Buenavista to accommodate new vessels other than motorbancas.”

Rep. Nava’s advocacy comes in the wake of nagging calls for the overhaul of facilities and stringent regulation of sea travel in the Iloilo strait following the August 3, 2019 sea accidents that left 31 people dead. /jft